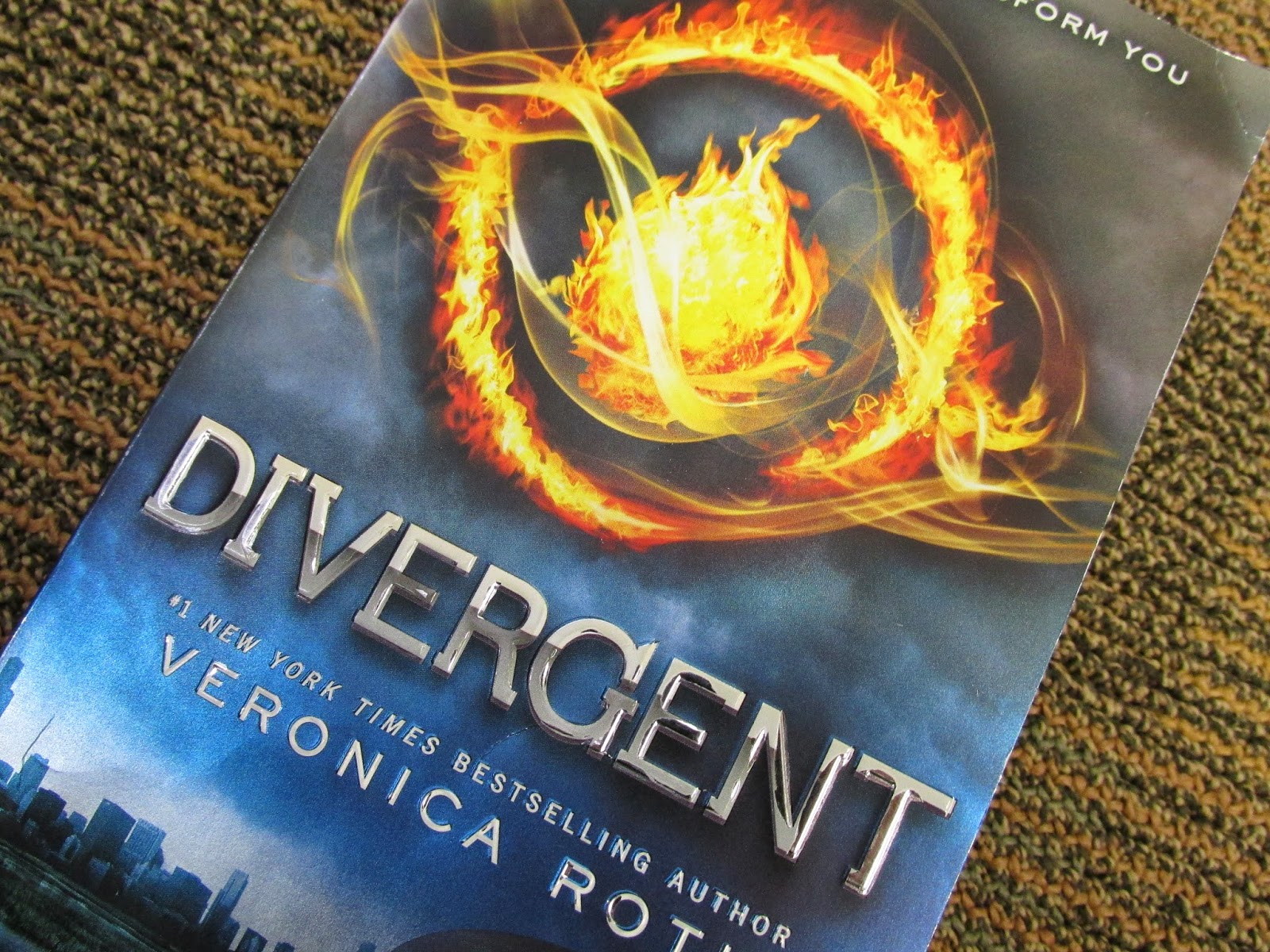 Divergent is the second dystopian book I've read this year. That's a lot for me because this is a genre I don't normally reach for, but I kept hearing people talk about it and then I saw that there was a movie coming out so of course I had to read it and then watch the movie. I didn't board the Hunger Games bandwagon back when the books first came out you see and I have yet to read them or watch the movies so this time I thought I'd jump on the Divergent bandwagon. God I'm such a follower. Anyway, the book is good. I liked it.

The main character, Beatrice, lives in what was once the city of Chicago and society has split up into five groups called factions: Candor who are the honest, Amity who are the peaceful, Erudite who are the intelligent, Dauntless who are the fearless, and Abnegation who are the selfless. At the age of 16 everyone undergoes a personality test of sorts to help them figure out which personality trait they most possess and help them determine which faction they should join because they are born into one faction, but have the choice to switch to another. Once they select their faction at the yearly choosing ceremony (wether it'd be the one they were born into or a new one) they can never switch factions. The problem is that Beatrice's test results, or Tris as she is later called, are inconclusive because she falls equally into three different factions, Abnegation (the one she was born into), Erudite, and Dauntless. This makes her divergent which makes it very dangerous for her because as she will find out, the government is threatened by her incapability to "fit in" to a single group and be easily controlled.

Like I said before, I liked the book. The movie was good too, but I don't think I will ever get used to the fact that the movies are never going to be exactly the same as the books, still good overall though. The story has action, suspense, and yes, even love. The book does have some violence that made me cringe a bit, the movie not as much. I was left with a lot questions about this society and how it came to be and about a few of the factions that were not talked about as much. These questions will probably be answered in the next book, Insurgent, but I guess that is how trilogy books work, the first book leaves you wanting more so that then you have to go out and get the other books. That's convenient isn't it? By the way, I took the book's personality test and I'm divergent. I suspect most people would be, at least I would hope so.

P.S. I'm looking forward to the next book in the series!

Just when I thought I had eaten the last of them I find two more. Don't worry, I'm thinking about freezing my Easter eggs juuuuust in case I wanna eat one some day.

Email ThisBlogThis!Share to TwitterShare to FacebookShare to Pinterest
Labels: Humor, Just My Thoughts

Who Was Cesar Chavez?

I saw the new Cesar Chavez movie last weekend and I am so glad the world is finally being introduced to him through this medium. If you've never heard of Cesar Chavez you are not alone. I believe most Americans don't know who he was. Hopefully you have heard the name before as there are schools, parks, buildings, and streets across the country named after him. Even here in Salt Lake City we have our very own Cesar Chavez Boulevard which is the part of 500 South that runs from about 500 West to 700 East. It goes without saying that our public education system has many holes and flaws in it. We keep hearing time and time again how the U.S. lags behind many other developed countries in education, even though more is spent per student here than elsewhere. Kids graduate from high school without proper reading, math, and science skills. It is a real shame that even history lessons are lacking, especially when we could use more minority historical figures and role models, but I am getting off topic here. I know about Cesar Chavez because I'm from the part of the world where his fight began, Central California, but it was not until college that I had a real lecture about him and what he did.

Cesar Chavez was an American civil rights activist. For decades the agricultural growers of Central California exploited the workers that did (and continue to do) the back breaking work of picking the fruits and vegetables that we (and the rest of the world) consume. The working conditions were awful. There were no toilets in the fields, no potable water, no breaks, and the pay was meager. Cesar Chavez along with Dolores Huerta started the United Farm Workers of America Union in 1962. In 1965 Cesar Chavez organized and led a strike against the grape growers of the region which lasted about five years before working conditions and pay began to improve. This was the beginning of the Chicano Movement and though there is still much more room for improvement in the fields, because even in this day and age mistreatment, child labor, and low wages still exist, Cesar Chavez helped promote awareness of the working and living conditions of the people that help feed Americans and the world.

I have included part two of a four part PBS documentary named Chicano that talks about this very topic. It is one of my favorite documentaries and I never get tired of watching it.