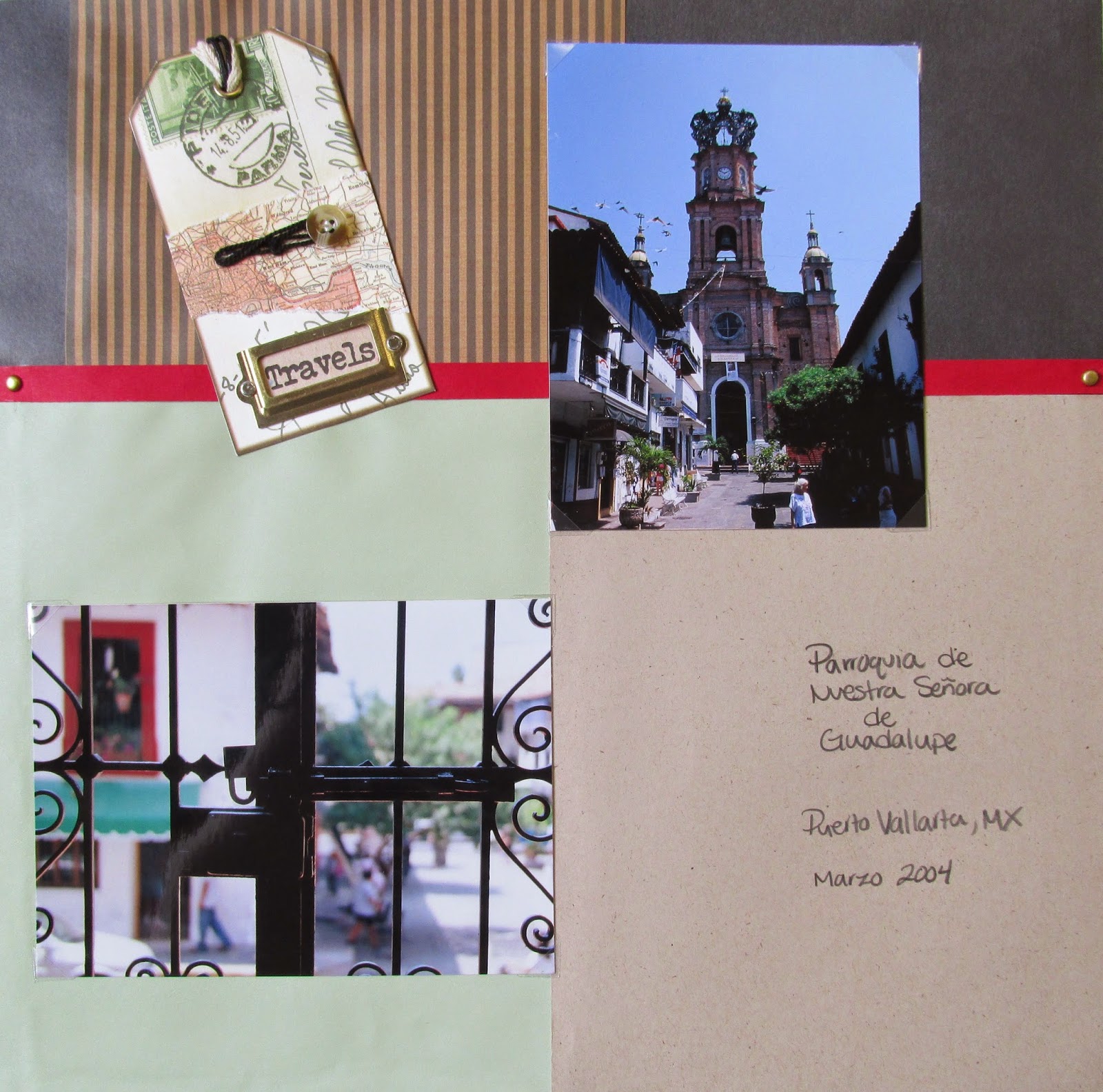 A scrapbook page from that time I went to Puerto Vallarta by myself 10 years ago. Boy, does time fly or what!? I need to remember to look back through my scrapbooks more often for inspiration. This page proves that less is definitely more. It's so easy and simple and yet so lovely. 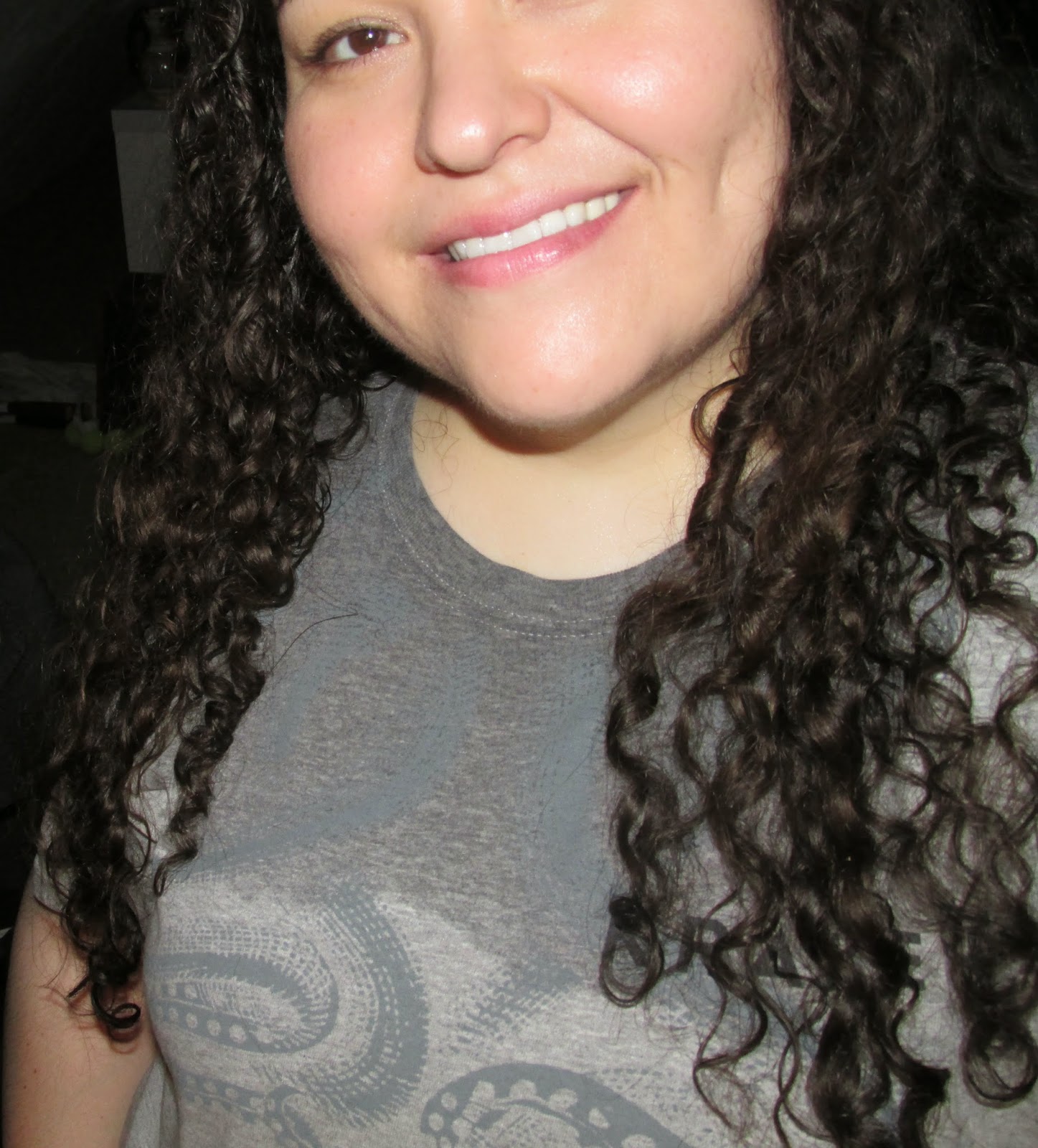 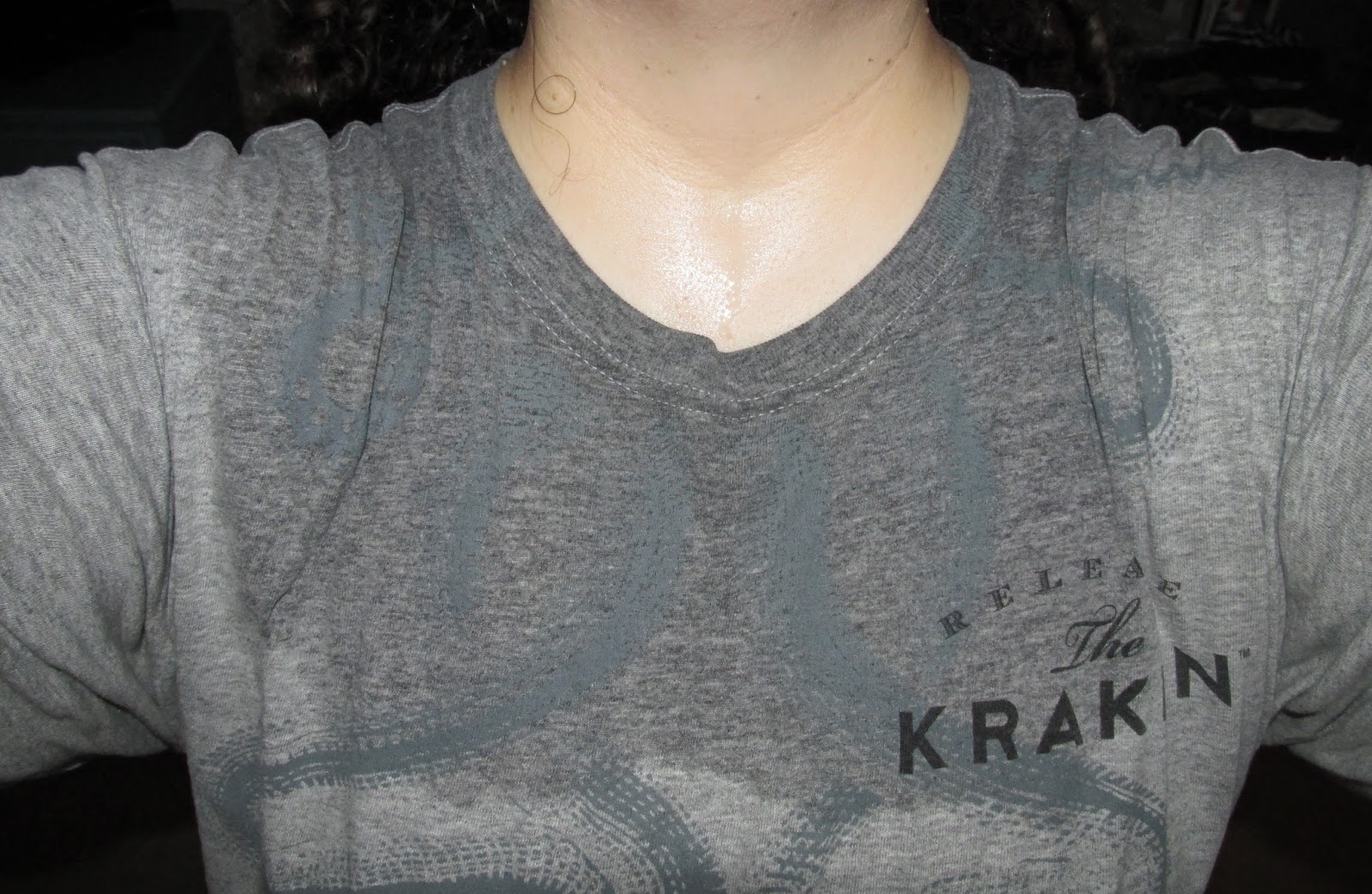 This was me a few nights ago. No, I didn't get caught in the rain, that wet stuff on my shirt is just a little souvenir I had left over from Zumba class.

Almost every time I get home from Zumba I take a few moments to admire the sweat on my shirt. I used to be embarrassed of my sweatyness so much that I would avoid wearing light colored shirts to Zumba as much as possible. Now I don't care. In fact I love it and I'm damn proud of it. In August it will be four years that I started taking Zumba classes pretty regularly, yet the sweating has not lessened very much. Some Zumba days I sweat buckets others not as much, that depends on that day's playlist, but despite having lost 30 lbs in the last year I continue to sweat a ton. I've come to the conclusion that I will probably never be one of those graceful women that barely breaks into a sweat at the gym. Instead, I'm gonna sweat like a beast and embrace it. I worked hard for it, after all, so hurray for sweating and all its glory! 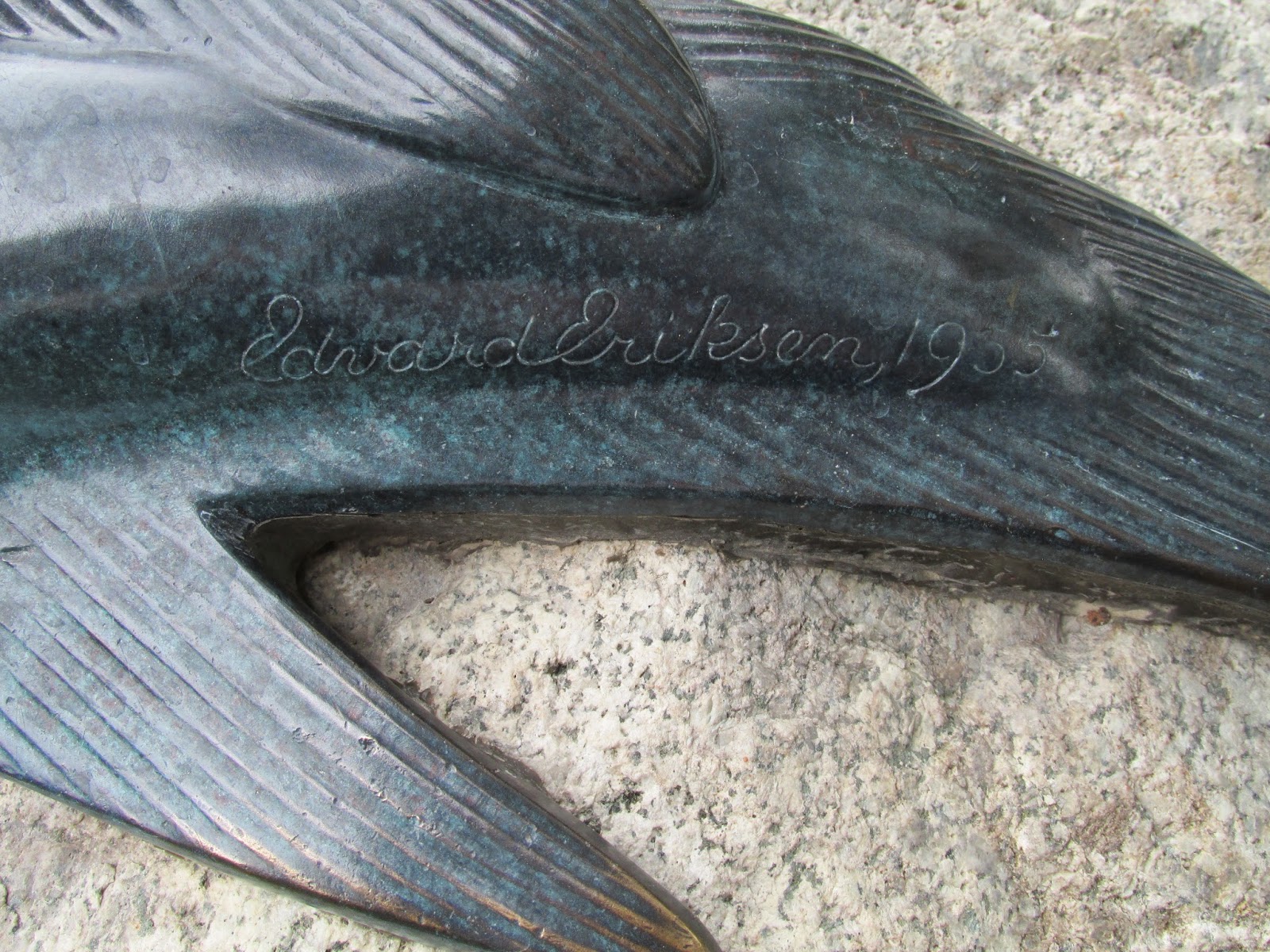 Did you know that we have an official replica of The Little Mermaid statue found in Copenhagen, Denmark here in Salt Lake City? My boyfriend recently went on a business trip to Denmark where he learned this and of course I had to see it. It is found at the International Peace Gardens of Jordan Park. The original statue was inspired by Hans Christian Andersen's fairytale The Little Mermaid and completed in 1913 by the Danish sculptor Edvard Eriksen. It has become Denmark's symbol and it is possibly its most famous tourist attraction. While there are many copies of the statue throughout the world, apparently there were only a handful of official replicas made by Eriksen. Something like three or four and we have one of them right here in our city. The Danish Garden at the International Peace Gardens was dedicated on June 5, 1955, Denmark's Constitution Day, and with the permission of the Danish King at the time, the statue was donated to Salt Lake City.


The first time I watched the Disney version of The Little Mermaid was at my brother's house when I was nine years old. I loved it so much that I begged and begged my dad to buy the movie for me. It was probably a luxury we couldn't afford at the time, but he bought it for me anyway and I probably spent the whole fourth grade watching it, but it was a good distraction for me to have during a time when our family was disintegrating. I have a sneaking suspicion that if I watch the movie now I can probably recite most, if not all of it. I still have it. It's the only VHS tape I own today. I don't even own a VCR nowadays, but I could never part with it.

I think this statue is such a gem for us to have here in our city as well as the International Peace Gardens themselves. There is only one other Peace Garden in the whole U.S. and it is located in Dunseith, North Dakota near the Canadian border that symbolizes the peace and friendship between the United States and Canada.

Today the International Peace Gardens of Salt Lake City represent 28 countries. Each country's garden was designed by that country and has some of its native flowers and trees. A lot of the gardens also have some sort of exhibit such as a statue or replica of a landmark. Unfortunately, many of these exhibits seem to be in need of some refurbishment. Also, most of the water features that are part of some of the gardens were without water when we visited, still, it is a lovely place, nonetheless, and it's free. Definitely worth the visit! 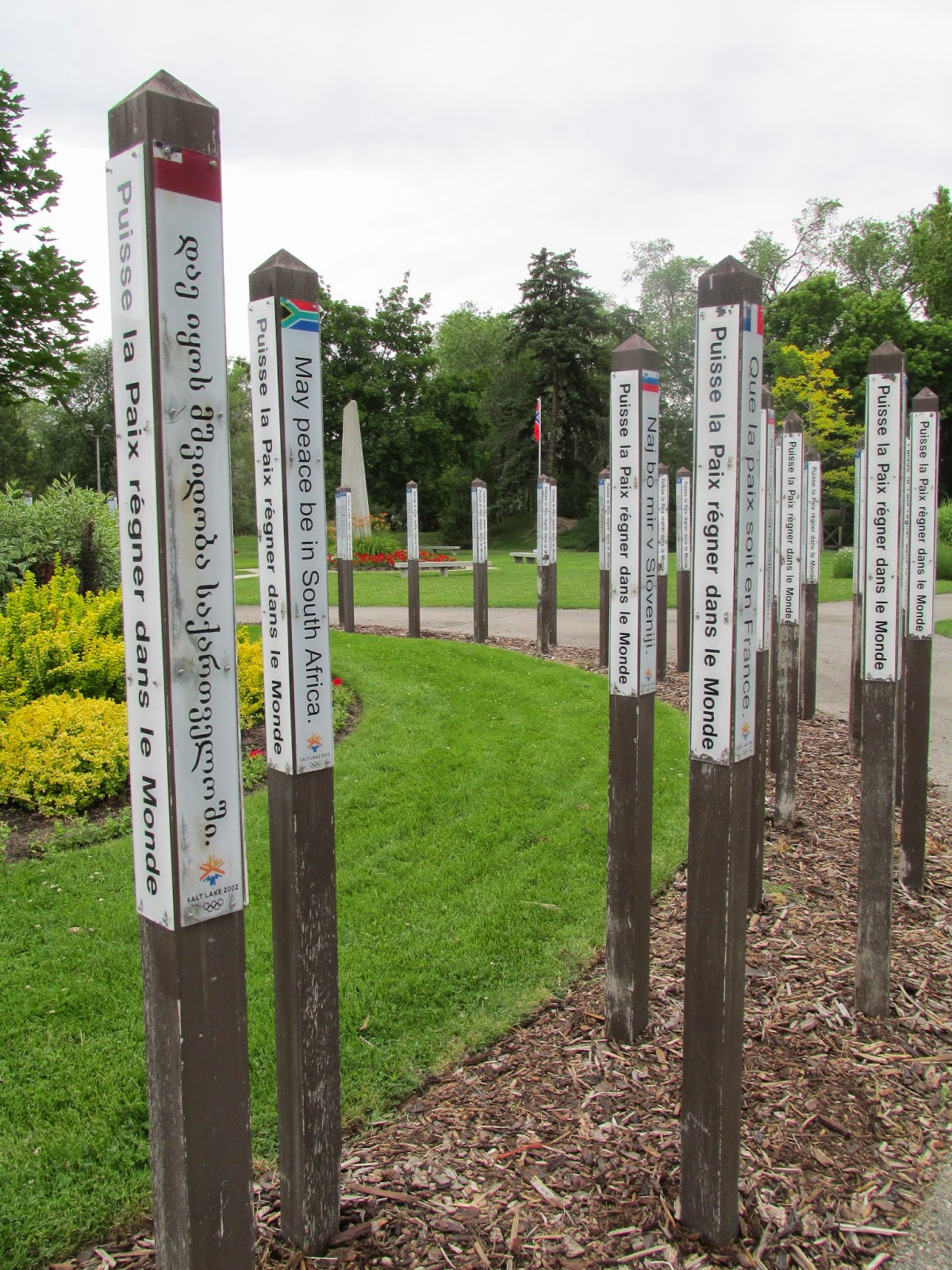 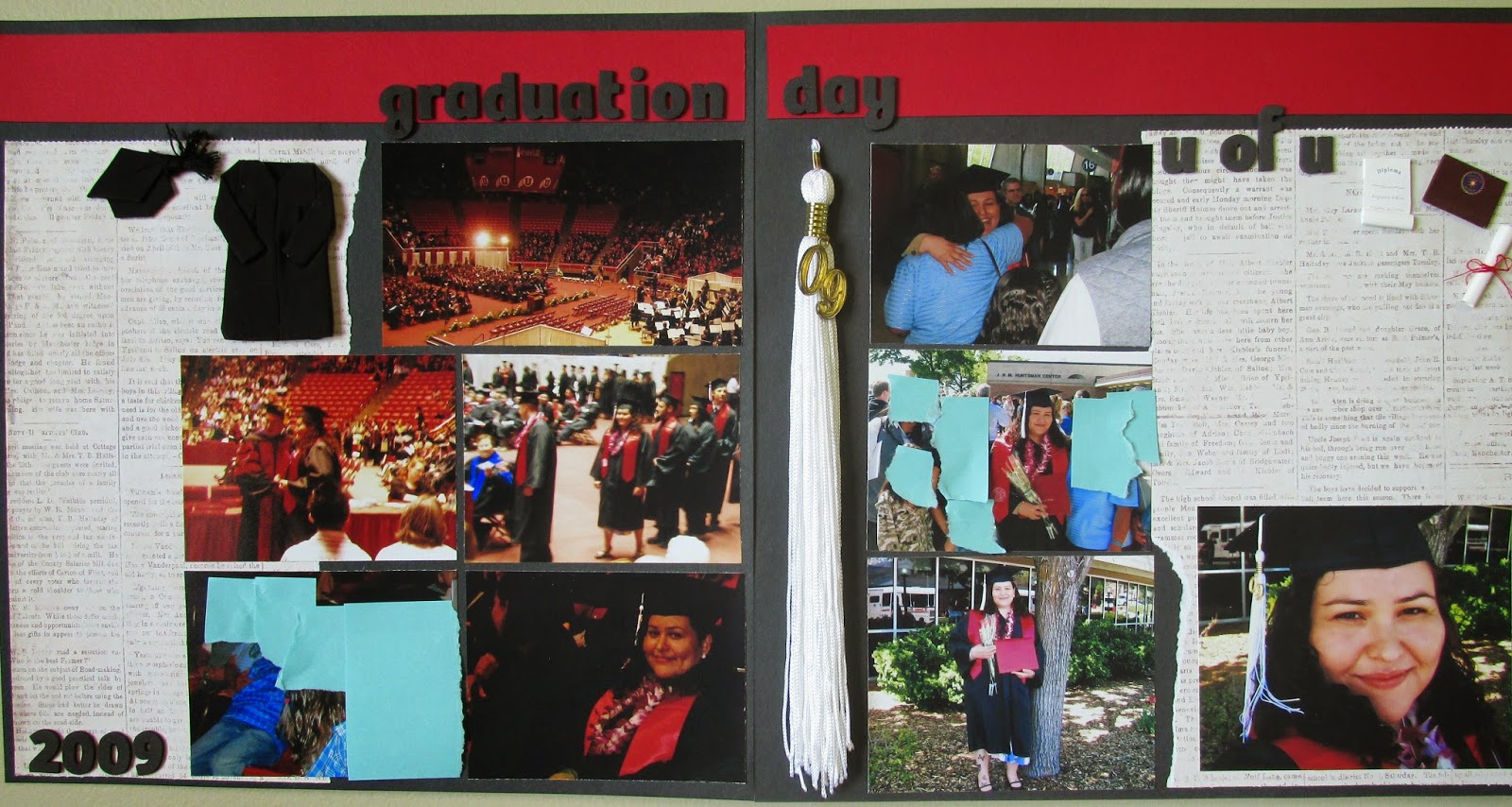 Since it's graduation season and since I've finally come around to scrapbook my college graduation pictures (from 5 years ago!!) I thought I'd post my scrapbook creation.